Meet Nyesha, one of the two newest dolls from the Hearts for Hearts collection by Playmates Toys.  I have been patiently waiting for this doll since her prototype photos began circulating after the 2014 Toy Fair in February.  You can read an excellent report about the H4H debuts at the Toy Fair, which included the unveiling of not only Nyesha but also Surjan from Nepal, by Char at Doll Diaries.

Hearts for Hearts has an unfortunate tendency of going silent on their Facebook page for long stretches of time, so collectors have been left hanging as to the general release date of the new dolls.  There were rumors that the release had been pushed back to 2015 so I’d pretty much given up hope of finding Nyesha anytime soon.

And then last Saturday happened.   My daughter attended a birthday party near a Target that I don’t usually frequent, so I decided to kill a little time in the toy aisle before picking her up.  I started in the Our Generation section, slim pickin’s.. Surprise! (not).  The Hearts for Hearts section is typically right next to OG and .. gasp.. there she was! Not only one Nyesha doll, but two.  And Surjan!  And quite a few of the other dolls as well.  I debated getting both Surjan and Nyesha, but then felt a bit guilty buying toys for myself so close to Christmas.  Heh.

I brought her home and stripped the box.  Would she be as gorgeous as her Toy Fair prototype? 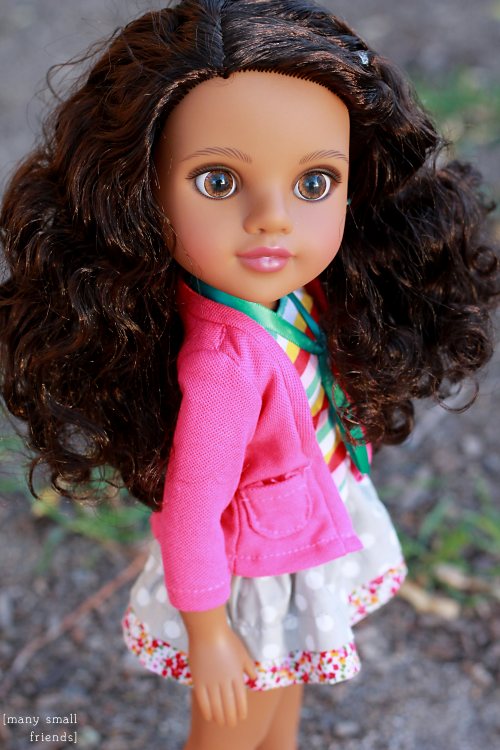 There are a couple of changes between the prototype and the actual production run dolls.  One easy to identify change is her hair.  Nyesha’s hair is not as gorgeous as the promo photos would lead you to believe, and it’s very, VERY prone to frizz.  My doll came out of the box with some frizz which only got worse as I gently worked with her.  If you purchase this doll for a child, be forewarned that the hair won’t look nice for long. 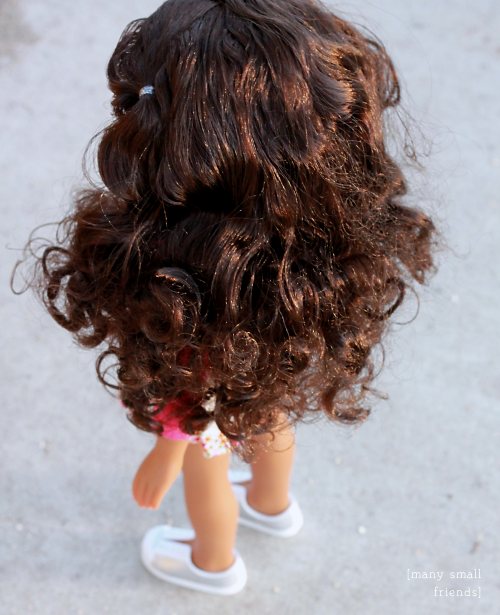 That said, it’s not horrible, and this is a 25ish dollar doll, so given the manufacturing constraints at that price point, I’m not shaking any judgey fingers at Hearts for Hearts.  I just wish they wouldn’t bother teasing us with unrealistic, higher quality prototypes.

There’s also something different about the face mold that I can’t quite put my finger on.  My Nyesha doll’s face is still beautiful, but decidedly different then the Toy Fair prototype. 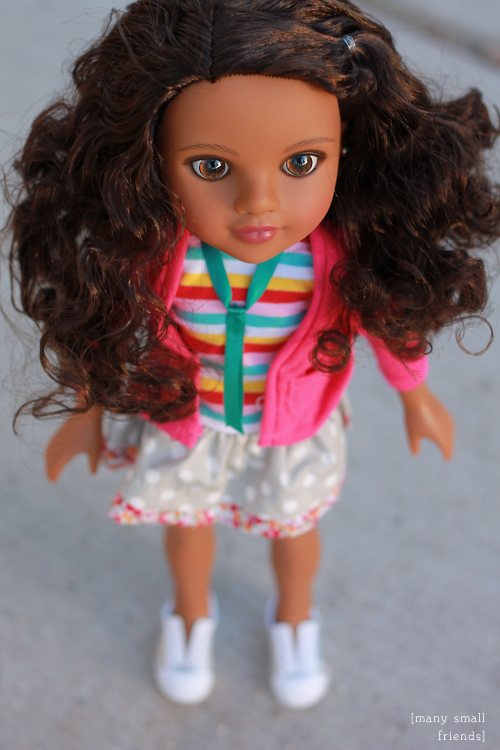 Despite these little let downs, I’m not disappointed in my purchase.  Nyesha is a lovely addition to my collection, photographs beautifully, and I’m happy to have her. I’ll let you know how her hair holds up over time.  Her clothing is decent quality, especially for the price point, and I’m particularly impressed with her vinyl sneakers which are a step up from the usual molded plastic throw-away quality of most department store dolls.

Hearts for Hearts received criticism with their 2013 release (the Shola and Mosi dolls) for the prototype clothing being downgraded significantly for the production dolls.  It’s not that the downgrade was entirely unexpected, but they didn’t change the box art to reflect the changes, so customers found that the box contents were not accurately depicted by the photos on the box.  This time around, Nyesha’s clothing appears to be identical to the box art.  It remains to be seen whether consumers will react negatively to the slightly different face mold and lower quality hair which are one again inaccurately depicted (at least in my opinion) by the box art.

As I mentioned, I found Nyesha at Target for $25.99.  According to the Playmates Toys website, you may also find the Hearts for Hearts dolls at Toys R Us, Walmart, Meijer, Kmart, and Barnes & Noble.   If you don’t feel like driving or calling around to your local brick and mortars, you can often find these dolls online.  As of this writing, you can get both Nyesha and Surjan along with quite a few of the Hearts for Hearts Girls from Amazon at near-retail pricing.

Be advised that the prices swing wildly for these dolls online, and while Nyesha and Surjan are currently widely available, the pricing will be decent.  But as the holiday season approaches and the first wave of dolls are snapped up from the stores (both by consumers and resellers), the prices will almost inevitably sky rocket.  As with Our Generation, Hearts for Hearts has been known to have some distribution issues, and as demand exceeds supply.. well, I’m sure you know what happens!

I made a video review of Nyesha if you’d like to see her in a little more detail.  In the video, I compare her in size to my Corolle Les Cheries, Paola Reina, and our American Girl doll Meggie (aka Cecile).

I’ll leave you with a few more pictures of the newest small friend posing with her new vinyl sisters.  I’d love to hear your impressions of the Hearts for Hearts Girls! 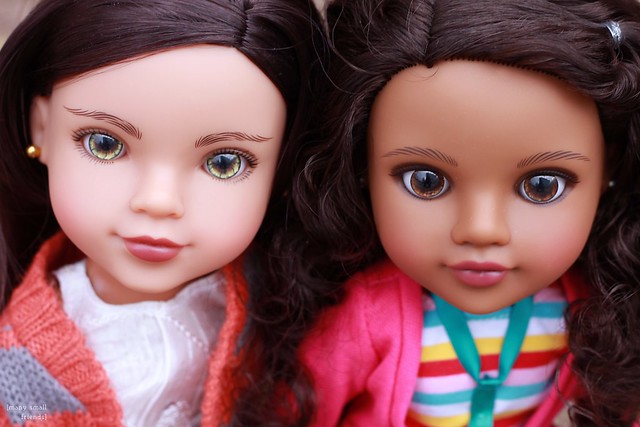 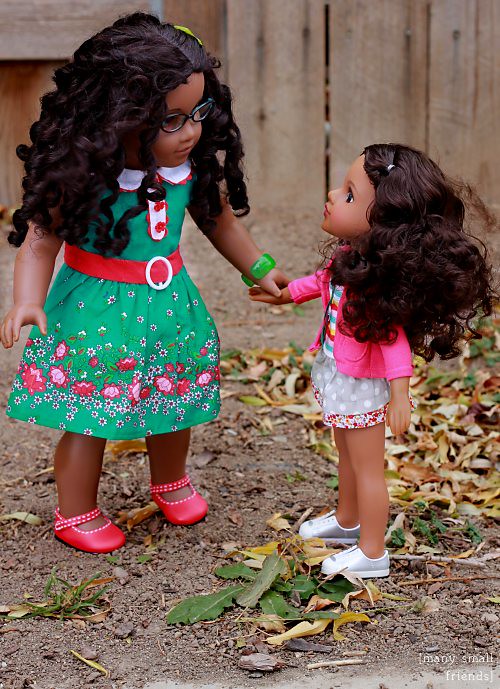 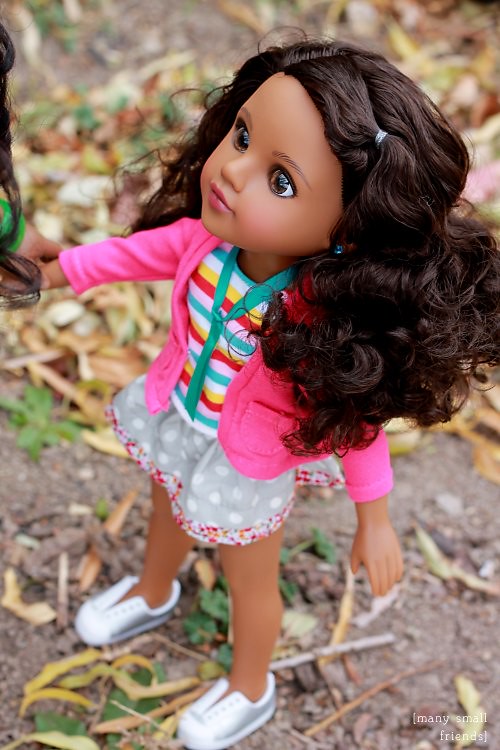